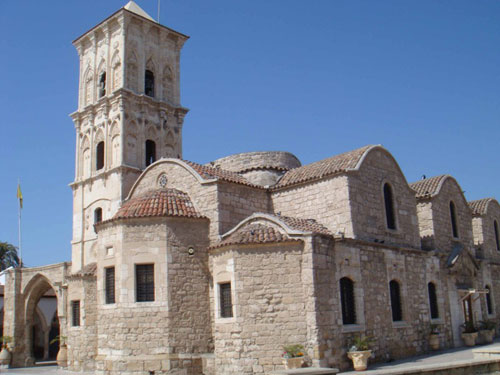 The Church of Ayios Lazaros (Greek: ?e??? ?a?? ????? ?a?????, also transliterated Agios Lazaros), or the Church of Saint Lazarus, is a late-9th century church in Larnaca (Greek: ????a?a, Turkish: Larnaka), Republic of Cyprus (a city on the southern coast of the island). The church belongs to the Cypriot Orthodox Church. 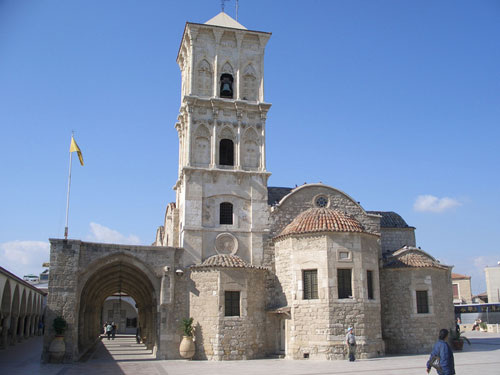 The Church of Ayios Lazaros is named for New Testament figure Lazarus of Bethany, the subject of a miracle recounted in the Gospel of John, in which Jesus raises him from the dead. According to Eastern Orthodox Church tradition, sometime after the Resurrection of Christ, Lazarus was forced to flee Judea because of rumoured plots on his life and came to Cyprus. There he was appointed by Paul and Barnabas as the first Bishop of Kittim (present-day Larnaca). He is said to have lived for thirty more years and on his death was buried there for the second and last time. The Church of Ayios Lazaros was built over the reputed (second) tomb of Lazarus.
Tradition says that the place of Lazarus' tomb was lost during the period of Arab rule beginning in 649. In 890, a tomb was found in Larnaca bearing the inscription "Lazarus the friend of Christ". Emperor Leo VI of Byzantium had Lazarus' remains transferred to Constantinople in 898. The transfer was apostrophized by Arethas, Bishop of Caesarea, and is commemorated by the Orthodox Church each year on October 17.

In recompense to Larnaca, Emperor Leo had the Church of Ayios Lazaros erected over Lazarus' tomb in the late 9th to early 10th centuries. It is one of three Byzantine churches which have survived in Cyprus; the other two are the Church of the Apostle Barnabas near Salamis, and the church that was built in the walkway leading from the Basilica of Saint Epiphanios to the font.

The church is an elongated building measuring 31.5 x 14.5 m with a tripartite sanctuary, semicircular apses internally and three-sided externally and a five-sided apse in the center. The interior structure of the church is divided into three aisles with bulky double pillars and arched openings going through them. These pillars bear the weight of the domes thus forming the central aisle while the north and south aisles bear a semi-cylindrical roof, intersected by cross-vaults. The stonework of the church consists mainly of square limestone block about a meter in thickness. The church has an open porch, from which steps descend into the church.
Under Frankish and Venetian rule (the 13th to 16th centuries), the church became Roman Catholic. A stone covered portico (stoa) of Gothic style was added on its south side during this time.
Iconostasis of the Church of Ayios LazarosThe three imposing domes of this Orthodox Basilica Church and the original bell tower were destroyed, probably in the first years of Ottoman rule (1571 AD), when the church was turned into a mosque. In 1589, the Ottomans sold it back to the Orthodox, probably because of its Christian cemetery. For the next two hundred years it was used for both Orthodox and Catholic services. The porch bears traces of Greek, Latin, and French inscriptions. In 1857, after the Ottoman authorities again allowed Cypriot churches to have bell towers, the church's bell-tower was rebuilt in a Latinate style.
The woodcarving of the unique Baroque iconostasis of the church was done between 1773 and 1782 by Chatzisavvas Taliadorou. The iconostasis was gold-plated between 1793 and 1797. Some of the icons were painted towards the end of the 18th century by Michael Proskynetes from Marathasa. Icon painter Hadjimicael completed the iconography of the iconostasis in 1797. Some of the wood-carved furniture (including a Rococo pulpit on one pillar for Catholic use) and icons on the walls are from the 17th century.
A fire in 1970 damaged much of the interior, including extensive damage to a section of the iconostasis together with the corresponding icons. The iconostasis has been partially restored and was replated with gold between 1972 and 1974. During the subsequent renovations of the church, on November 2, 1972, human remains were discovered in a marble sarcophagus under the altar, and were identified as part of the saint's relics (not all having been removed to Constantinople, apparently). 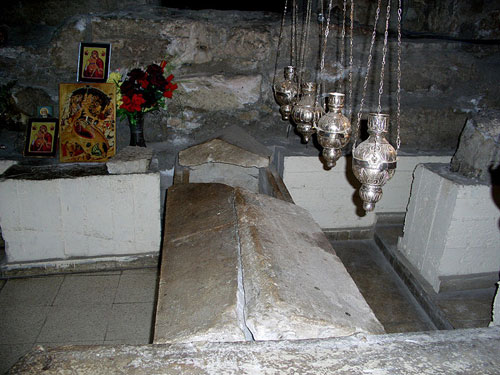