Monasteries and Churches in Cyprus

When the apostles Paul and Barnabas arrived in 45/46 AD in Cyprus, the island then became the first Christian community outside Israel. Today small chapels, churches and monasteries testify to nearly 2000 years of Christian cultural life all around Cyprus. 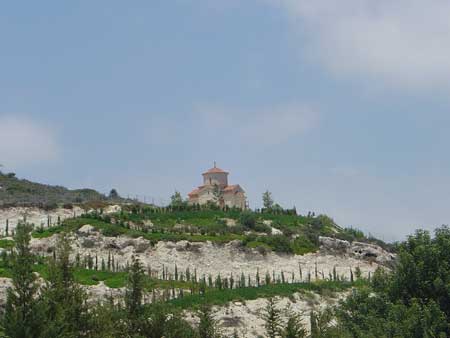 About 15km northeast of Limassol there is the monastery of Ayios
Yeoryios Alamanos. Makarios III founded this convent. Today the nuns mainly work as nurses. 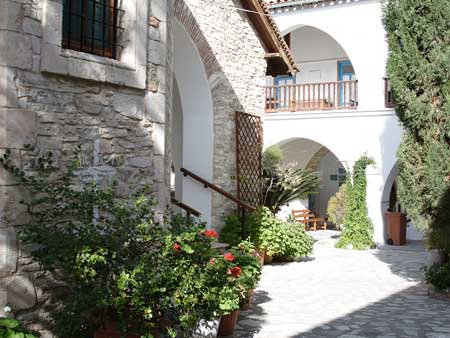 About halfway between Larnaka and Limassol, near the famous village of Lefkara, there is the monastery of Ayios Minas. This convent has existed since 1670. Nowadays the nuns run the monastery painting and selling religious icons. 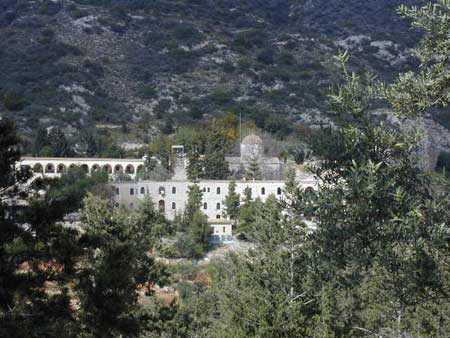 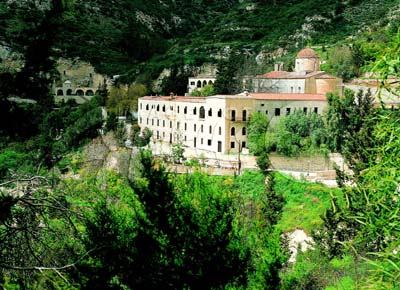 The monastery of Ayios Neophytos is 9 km north of Paphos. Founded at the end of the 12th Century by Cypriot hermit and writer Neofytos, carved a home for himself inside of the mountain rock. The Monastery is located below the grottoes and is home to only a handful of monks. The Monastery also contains a collection of icons and the remains of some 16th century frescoes. Every January the monastery hosts a two day fair where you can buy Cypriot crafts, foods, and monastic goods. 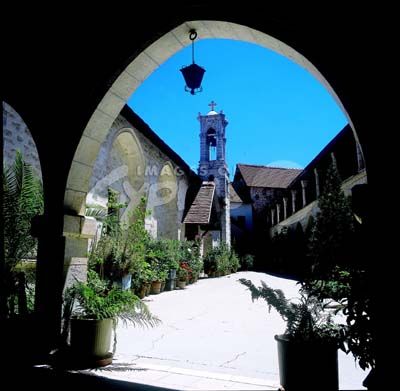 The monastery lies near Panagia village, west of Pafos forest. Set in beautiful surroundings, the monastery, was founded in 1152 A.D. by a monk called Ignatios who found at Moulia area in Pafos the miraculous icon of the Virgin Mary believed to have been painted by Luke the Evangelist. Ignatios took the icon to the mountain and built the monastery dedicated to 'Our Lady of the Golden Pomegranate'.
The monastery, whose present building dates back to 1770, has a collection of important icons and treasures. The church lies in the middle of the monastery and impresses with its frescoes above its three entrances. The icon of Christ and the Virgin Mary in the monastery is also believed to be painted by Apostle Luke the Evangelist. It is gold and sliver plated.
A center for the protection of Byzantine and post-Byzantine icons and other treasures operated at the monastery. A Byzantine museum has recently been set up. In front of the main entrance of the monastery there is a café restaurant from where the view is panoramic and majestic.
An impressive religious ceremony and celebrations are held on 15th August.
The old winery of the monastery produces some of the best vintage wine of Cyprus produced from the monastery's vineyards. 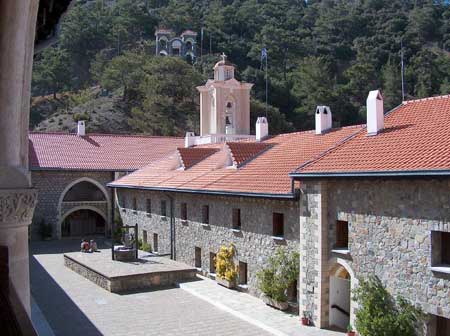 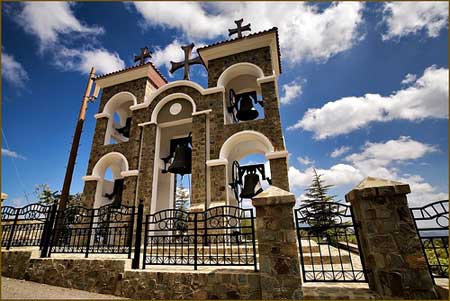 At the top of a mountain about 1318 m high, in the north west of Troodos, stands the richest and most splendid monastery in Cyprus, Kykkos Monastery. Kykkos was founded in the 11th century but unfortunately it has been burned down several times and there are no reminders of the original building, in contrast to the other Cypriot monasteries. Near this famous monastery is the monument to Archbishop Makarios III, the first president of the Republic of Cyprus. 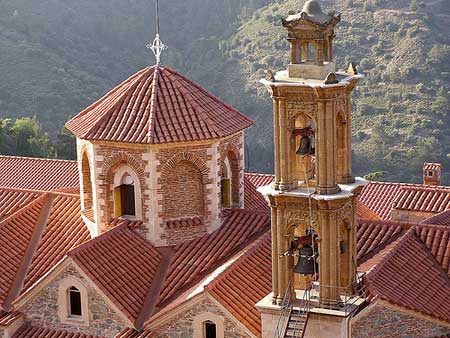 About 40km southwest of Nicosia on top of the Machairas mountain (1423 m), stands the secluded monastery of Machairas. Machairas is a popular place for excursions, not only because of the quiet atmosphere of the monastery, but also due to the museum of Giorgios Afxentiou. Giorgios was a Cypriot freedom fighter who fought against the British colonial power . Giorgios Afxentiou died after defending himself in a nearby hideout. 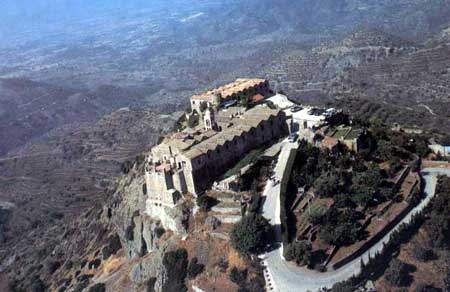 Stavrovouni is a hill in Cyprus, on top of which stands a Greek Orthodox Monastery.
The monastery Stavrovouni which was constructed on the peak of the mountain of the same name in the District of Larnaca. In earlier times it had been known under the name of Olympus , nowadays , the highest point of Troodos Mountains further to the west bears that name . Stavrovouni , as the name already says , is dedicated to the Holy Cross ; it can be derived from two words 'stavros '(cross) and 'vouno' (mountain) . According to religious tradition , the monastery was founded by St. Helena, the mother of the Byzantine Emperor Constantine I, the Great. According to the 15th century Cypriot chronicler Leontios Makhairas , Helena had discovered the three crosses on which Jesus and the two thieves had been crucified on her pilgrimage to the Holy Land. She had them excavated and wanted to bring them to Constantinople. But she is said to have left one of these crosses in Cyprus during an involuntary visit caused by shipwreck , and to have presented it to a monastery . Thus the legend .
Stavrovouni is the earliest documented monastery on the island. The oldest written reference dates from the Byzantine period. It proves that Stavrovouni had been an important religious centre since the 4th century. The relevant information is to be found in the memoirs of a Russian traveller , Abbot Daniel, who stayed on Cyprus in 1106 . He recorded that the Holy Cross was located on Mount Olympus with objective of 'warding off evil spirits and curing any illness ' , and he noted : 'This cross is like a meteorite , it is not supported in the ground , because the Holy Ghost holds it in the empty space . I , unworthy man , knelt down before this holy , mysterious object and have seen with my own , sinful eyes the inherent holy grace present in this place . ' After its foundation , Stavrovouni was occupied by Orthodox monks living according to the rule of St. Basil . We obtain further historical information from Western visitors to Cyprus in the 13th. century . Willibrandi de Oldenburg , for example , visited Stavrovouni in 1211 and wrote : 'The cross of the Good Thief is on the highest mountain in Cyprus' - which was wrong , as Stavrovouni is not as high as the Troodos peak . Ludolph von Suchen noted in 1305 : 'The mountain is like the Mount Tabor on which the Benedictine monks live . From its peak one can see the Lebanon .' That is true , but the weather must be very clear in order to be able to check this .
In its long history , Stavrovouni went through times of great poverty and hardship caused by the most varied invasions by foreigners on the island . Nowadays , the Holy Cross is no longer there and nobody knows what has happened to it . In 1598 , the Bohemian nobleman Krystof Harant noted :'Nobody knows what the Turks have done with the Holy Cross .' The walls , the church , the iconostasis and monks' cells in Stavrovouni were almost completely destroyed during a great fire in 1888 . The only relic which has been preserved down to the present is a silver cross in which a minute piece of the holy cross is inserted , the only major reliquary which is still kept in Stavrovouni .
Recently , the monastery underwent a complete renovation . Its small church was restored again with frescoes and icons by well-known painter , Fr. Kallinikos , a monk from Stavrovouni . The legend of the foundation is recorded in these pictures , St. Helena in a brilliant red garment and the Finding of the True Cross in Jerusalem . By the way , the emperor's mother recognised that she did have the right cross by the miraculous healing of a woman . Colourful , but also not without the skull painted beneath Christ's Cross for centuries is the Deposition . The majority of the frescoes in the church refer to the Cross and the life of St. Helena . In this manner , Stavrovouni is continuing the deeply-rooted Byzantine painting tradition .
The present monks in Stavrovouni live a very strict form of monastic life , similar to that of the monks on Mount Athos. The rule of their first abbot , Dyonisios , forms the basis of this . Women had been able to visit Stavrovouni until a few years ago, when the monks banned them. 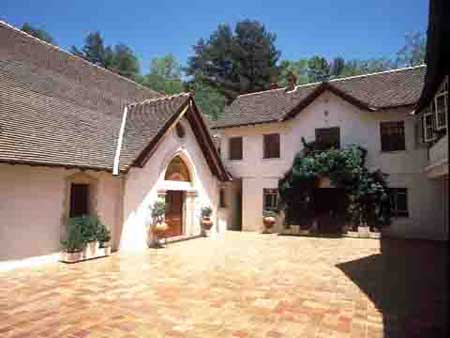 About 5 - 10 km from Platres, is the small monastery of Trooditissa. This monastery is a popular place of pilgrimage. Prayers to the holy Icon of Virgin Mary give hope to childless couples who wish for a child.
Trooditissa Monastery, (???ast??? ????d?t?ssa?) is situated on the southern slopes of the Troodos Mountains on the island of Cyprus. It is an orthodox monastery dedicated to the Virgin Mary.
It was founded in 990, but the current building dates back to 1731. It is built at an altitude of 1,500m (4566 feet) and the closest village is Plátres.

Ayios Heraklidhios Monastery
The monastery of Ayios Heraklidhios, near the archaelogical site of Tamassos (about 20 km west of Nicosia), was founded about 400 AD on the grave of the holy Heraklidhios. Nowadays a convent of nuns lives in the old monastery. 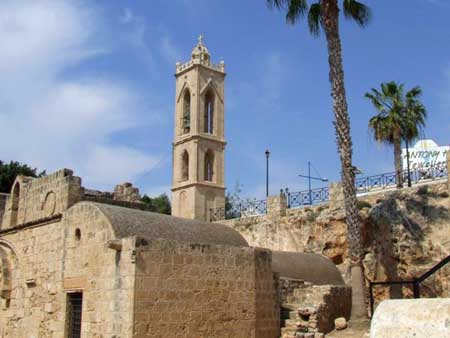 The Ayia Napa Monastery was founded in the 16th Century. Its tranquil courtyard and marble fountain offer a cool respite from the world outside 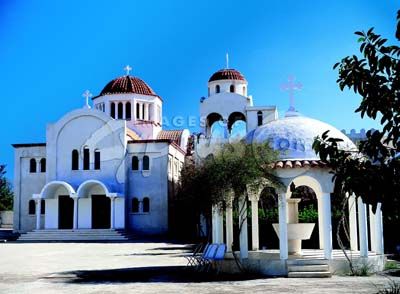