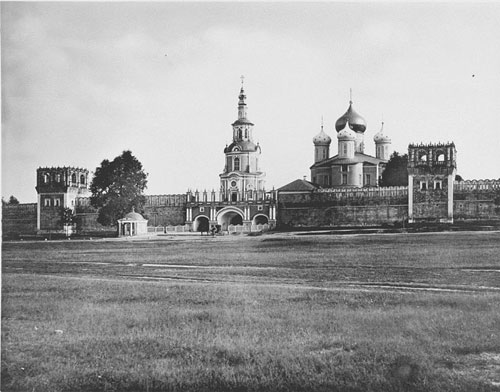 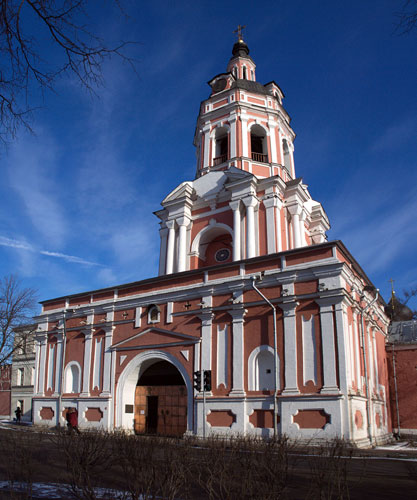 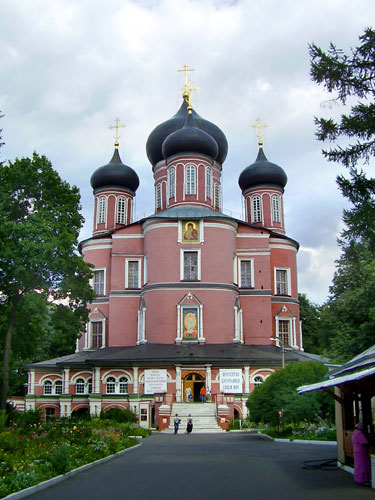 Donskoy Monastery (Russian: Донско́й монасты́рь) is a major monastery in Moscow, founded in 1591. in commemoration of Moscow's deliverance from an imminent threat of Khan Kazy-Girey’s invasion. Commanding a highway to the Crimea, the monastery was intended to defend southern approaches to the Moscow Kremlin.
The monastery was built on the spot where Boris Godunov's mobile fortress and Sergii Radonezhsky's field church with Theophan the Greek's icon Our Lady of the Don had been located. Legend has it that Dmitry Donskoy had taken this icon with him to the Battle of Kulikovo in 1380. The Tatars left without a fight and were defeated during their retreat.
Initially, the cloister was rather poor and numbered only a few monks. As of 1629, the Donskoy Monastery possessed 20 wastelands and 16 peasant households (20 peasants altogether). In 1612, it was taken for one day by the Polish-Lithuanian commander Jan Karol Chodkiewicz. In 1618, Russian Streltsy defeated the Ukrainian Cossacks of Petro Konashevych under the monastery walls.
In the mid-17th century the monastery was attached to the Andreyevsky Monastery. In 1678, however, its independence was reinstated and the cloister received rich donations, including more than 1,400 peasant households. In 1683, the Donskoy Monastery was elevated to the archmandrite level and given 20 desyatinas of the nearby pasturelands. Vidogoshchsky, Zhizdrinsky, Sharovkin, and Zheleznoborovsky monasteries were attached to the Donskoy Monastery between 1683 and 1685.
Since 1711, the Great Cathedral's vault was used for burials of Georgian tsarevichs of the Bagrationi family and Mingrelian dukes of the Dadiani family.
In 1724, the monks and the property of the Andreyevsky Monastery were transferred to the Donskoy Monastery. By 1739, it had already possessed 880 households with 6,716 peasants, 14 windmills, and a few fisheries. In 1747, the authorities wanted to transfer the Slavic Greek Latin Academy to the Donskoy Monastery, but the cloister confined itself to paying salaries to the academic staff from its own treasury.
Archbishop Ambrosius was killed within the monastery walls during the Plague Riot in 1771. In 1812, the French army ransacked the Donskoy Monastery, the most valuable things having been moved to Vologda prior to that. There had been 48 monks and 2 novices in the monastery by 1917.
After the October Revolution, the Donskoy Monastery was closed. In 1922–1925, Patriarch Tikhon was detained in this cloister after his arrest. He chose to remain in this monastery after his release. Saint Tikhon's relics were discovered following his canonization in 1989. They are exhibited for veneration in the Great Cathedral in summer and in the Old Cathedral in winter.
In 1924, some of the facilities of the Donskoy Monastery were occupied by a penal colony for children. In 1934, the Donskoy Monastery was transferred under the care of the Museum of Architecture of the Soviet Academy of Architecture. In 1964, the cloister became an affiliate of the Shchusev's Museum of Architecture.
The Soviets moved the remnants of many demolished monasteries and cathedrals to the Donskoy Monastery, including the Cathedral of Christ the Savior, Church of Saint Nicholas the Wonderworker in Stolpy, Church of the Assumption on Pokrovka Street in Moscow, Sukharev Tower, and others.