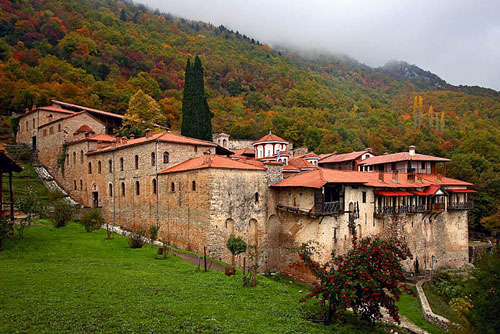 This is Dousikou Monastery, located at an altitude of 650 m on the eastern slopes of Koziakas mountain, 6,5 km from the town of Pyli. It's also know as "Monastery of the Saviour of Dousikou" or "Monastery of Saint Vissarionas". Once upon a time there were 365 cells for the monks, one for each day of the year and unce upon a time they were all full. Today, only 8 monks live in the monastery.
Saint Vissarionas re-established and completely rebuilt from the foundations the monastery of Dousikou after his election as the Metropolite of Larissa, between 1527 and 1535. After the saint’s death (1540) he was followed in the Metropolitan throne of Larissa, by Neofitos A’ who started rebuilding from the foundations a more magnificent, beautiful and illustrious temple in 1550, assisted by the under him bishops of Litza Loukas, of Dimitriada Iosif, and of Fanari Martirios. The catholicon of the monastery that saint Vissarionas had built (around 1530) was ruined by the great earthquake of the 24th of April 1544. To the temple was added the ground narthex, and in the 8th of November 1557 all of the catholicon had been wall-painted by the Konstantinople painter Tzortzis.
The catholicon of the Savior is of athonic type, that is thtee-conched, four-columned, cross-vaulted with a dome and a spacious three-part narthex, the liti. The wood-carved gold-covered screen is dated from 1767. over the nartex of the catholicon are three fully wall-painted chapels. Of All Saints, of the Presentation of the Virgin and of the Holy Forerunner. In the library of the monastery are saved hundreds of volumes with hand written codices, scrolls, gold-bulls, sigilliums (decrees), firmans, etc. In the monastery are also kept valuable relics, amongst which is the scull of saint Vissarionas, the Archetypal Founding Will, part of is archbishopric verge, etc. The monastery of Dousikou is a monk monastery, and the entrance to women is not allowed. For the women to attend mass, a chapel has been built outside the monastery. The monastery celebrates the Transfiguration of the Christ (6th of august) and the saint Vissarion (15th of September) who was its founder
It is one of the very few monasteries outside Mount Athos, where "avaton" still stands, it means that no women are allowed to enter for any reason. It is open to male visitors from 08:00- 12:00 and 15:30-19:00. You should pay attention to the fantastic frescoes by Tzortis of the Cretan "school".
It looks like a fortress and it was a refuge for rebels during the years of Ottoman Empire. It was bombed by the Nazis during WW2 but suffered only minor damages (the monks say it was a miracle).