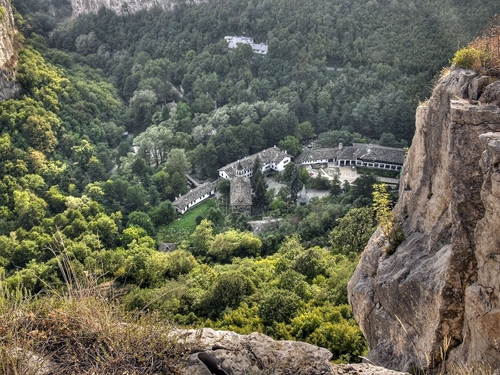 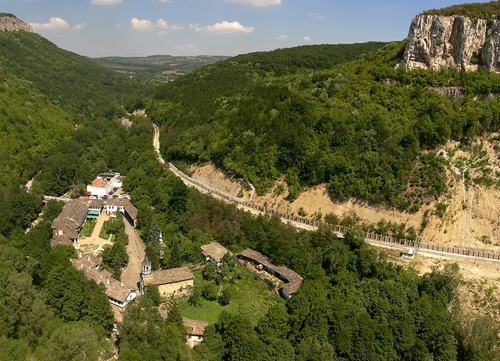 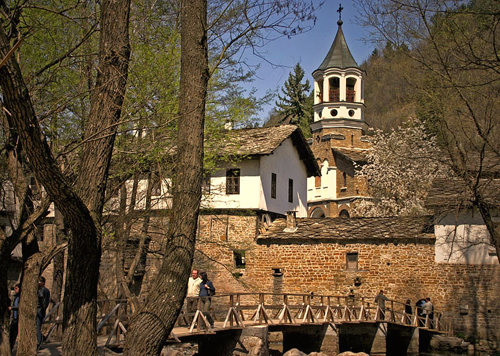 It is believed that the first monastery in this place was founded some 2km to the north of the present-day buildings, in an area called The Little St Archangel. Its founders were two rebel boyars of the then-capital city of Turnovo –the Assen and Petar brothers. In the 14th century, the holy place was one of the main centres of Hesychasm and sheltered many monks. At the beginning of the 15th century, the monastery was destroyed by the invading Ottoman troops. Later on, it was reconstructed on a neighbouring site, known as the Big St Archangel, but the fate of this monastery was no happier than that of its predecessor. The Dryanovo monastery was restored anew at the end of the 17th century, this time in its present-day place. The main church of that time had a single nave and was half-hidden in the ground. It was standing very near to the present-day church; besides it, there was also a secondary shrine.
The renovation of the monastery was started at the time of father Rafail, during the 40es of the 19th century. The current residential buildings rising from the side of the river were built at that time, while the new church was finished in 1845. Gradually, the renovated Dryanovo monastery became a religious and cultural centre and one of the largest and well-kept cloisters in the region of Turnovo.
Dryanovo monks took active part in the Bulgarians’ uprisings and plots against the Ottoman rule. One of the main quarters of the Bulgarian Central Revolutionary Committee in Turnovo was located exactly in the monastery and famous rebel leaders such as Vassil Levski and Georgi Izmirliev were often to be found there. There was a secret storeroom for food and arms, which was the reason why rebel leaders Priest Hariton and Bacho Kiro used the monastery as their fortress at the time of the April uprising. Only a small number of the Bulgarian rebels survived the battle with the Turkish troops, while the monastery was again set on fire with the church being the only building that is left relatively intact. The most recent reconstruction of the complex was carried out shortly after the Liberation. A new residential part and a museum were added to the existing buildings. The bell-tower was erected in 1925.