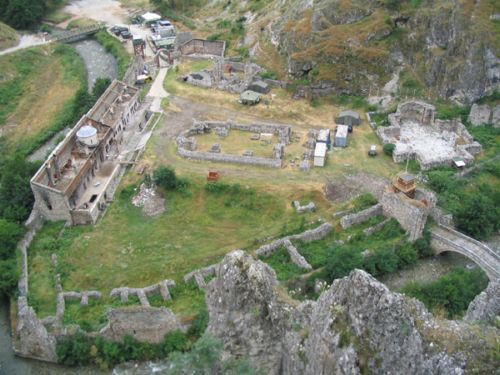 Holy Archangels Monastery was built on the site of an older church during the period from 1343 to 1352 as the pious endowment of Tsar Dušan. As one might expect of the monumental endowment of the most powerful Balkan ruler of the age, it housed no less than 200 monks and its first abbot, the blessed Metropolitan Jacob, who was responsible for the construction of the monastery. The monastery estate stretched from Mt. Sara to the Adriatic Sea. In his Founding Charter the Tsar gave Holy Archangels 93 villages, an iron mine in Toplica, fertile land and vineyards. The revenue from the rich Prizren market belonged to the Monastery. Cooking oil arrived from Bar and fish from Lake Skadar and Lake Plav. Among the craftsmen also given to the Monastery by the Charter were master builders Petros, Vojislav, Srdan, Nos and Vojihna, who are believed to have participated in its construction. 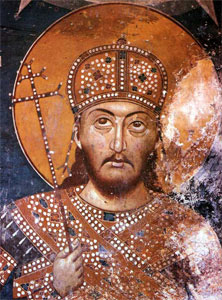 Tsar Dušan was interred in the main monastery church. The reconciliation of the Serbian Church and the Patriarchate of Constantinople, which took place in the Monastery, is the most important event after Dušan's death. The historian Constantine Jiricek wrote that in 1375, after the reconciliation of the Serbian and Greek Churches, representatives of both Churches served a Divine Liturgy at the tomb of Tsar Dušan and on that occasion the Greek representatives removed the anathema from Dušan, Tsar Uroš, and Patriarchs Joanikije and Sava. At one time the Monastery was the residence of St. Jefrem, the Serbian Patriarch in the time of the Battle of Kosovo. 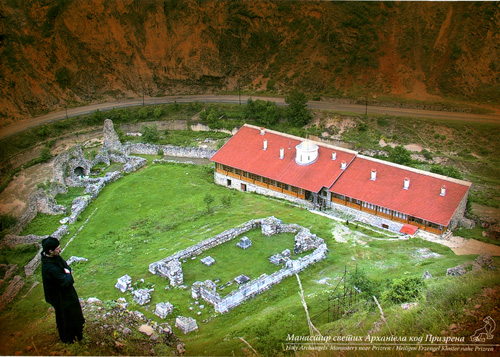 There is very little information about the life of the monastery in the period following the arrival of the Turks in the Balkans. After the fall of Prizren in 1455, the monastery was occupied and damaged. Sparse historical sources and archeological excavations give evidence of the decline of the entire monastery complex and in the second half of the 16th century its total destruction began. The church was completely destroyed by Sinan Pasha and the material from the destroyed monastery was used by him in 1615 for the construction of his mosque in Prizren. Abandoned, leveled to the ground and flooded by the river, the holy shrine remained in this condition for three centuries. During all this time the people never forgot it. Even in those troubled times Serbs gathered at its ruins twice a year, for the summer and fall feasts of the Holy Archangels, keeping alive the medieval tradition of church assemblies in Prizren which continued to be held in the Monastery.
In 1927 Dr. Radoslav Grujic conducted extensive research and archeological excavations of the Monastery and he transferred the articles found to the present-day Archeological Museum in Skopje. After the Second World War, in the 1970's, after the Second World War, extensive conservation and restoration work was done in order to protect the foundations and remaining walls. 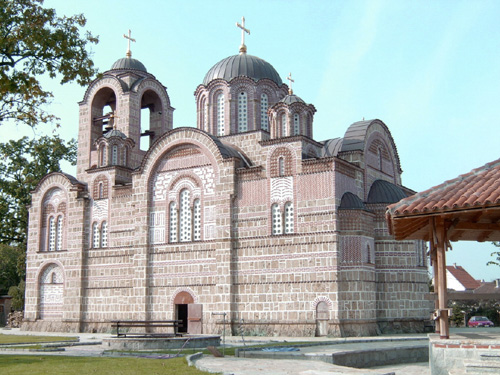 The main church, dedicated to the Holy Archangels Michael and Gabriel, was a monumental structure (28.5 meters x 16.75 meters) with a foundation in shape of an inscribed cross but with somewhat narrower lateral naves, which was not typical in churches of this kind. On the eastern side were three apses: the middle one was wider and externally in the shape of a pentagon and the lateral ones were smaller and externally in the shape of a triangle. A large dodecagonal dome 6.4 meters in diameter rested on four arches supported by four pillars. On the western side there was a narthex with five vaults partially closed by parapet plates and architecturally decorated. The façades were covered with white and red marble and divided in three levels by decorated stone wreaths. Inside the church stood a marble iconostasis and a lavish floor quite famous throughout medieval Europe; in the narthex, it was of white and blue tiles and in the nave of stone reliefs with mosaic tiles inserted between them. In addition to complex geometric motives, mythical animals, griffons, lions, birds and fish were depicted on these floor mosaics. The interior of the church was painted with frescoes and the capitals, portals, windows and church furniture were richly decorated with plastic artsculptures. The area around the Tsar's tomb was architecturally decorated with a series of small arcades connected in a unique fashion with now destroyed frescoes. 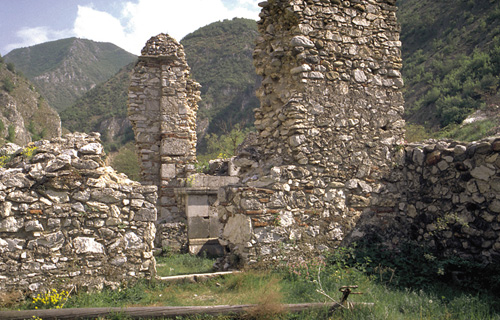 The Church of St. Nicolas was considerably smaller in size (13. 2 meters x 7 meters) but it was built and decorated in the same way. It was a single-nave edifice with an apse in the east and an open narthex on the west side. The dome rested on the wall to the west and on two pillars in the sanctuary. There was also another dome above the narthex.

With the arrival of Bishop Artemije to the throne of the Orthodox bishops of Raška and Prizren, a momentous reconstruction of monasteries and coenobia in Kosovo and Metohija began. Thus, with the blessing of His Grace, in the 1990's the reconstruction of Holy Archangels near Prizren began, too. The necessary infrastructure was built and within the old walls a new residential quarter (konak) was built for the brotherhood of monks. A chapel was built inside the konak dedicated to Holy Bishop Nicholas of Žica. The first monks arrived in 1998 and the monastery since then has gained an important role in the spiritual life of the Serb people, especially in this area. 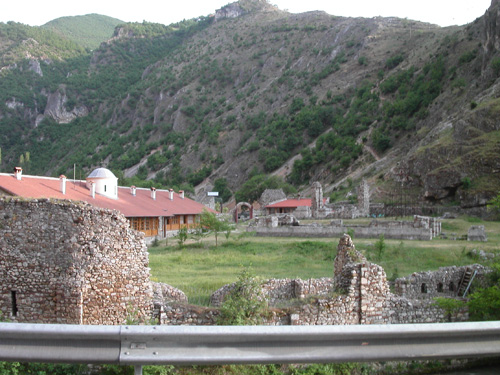 Full reconstruction was interrupted by the war in this region, which has not spared the brotherhood of the Holy Archangels. In June 1999 a monk from the monastery, Fr. Chariton, was abducted. Immediately afterwards, a dozen of monks, together with the majority of the Serbs from this region, left the monastery. The headless body of Fr. Chariton was found in mid 2000 and buried in Crna Reka Monastery. After the arrival of KFOR the brethren gradually returned to the monastery. German soldiers surrounding the monastery complex maintain a security zone.

The life of the monastery unfolds in complete isolation and consists of everyday services and monastic duties. The woodcarving workshop produces miniature carved items which are very rare and have become well-known abroad. The tailoring workshop is also busy and the monks are learning to work with computers. Today the monastery has become a spiritual center gathering the remaining Serb Orthodox people from Prizren and Sredacka Župa.