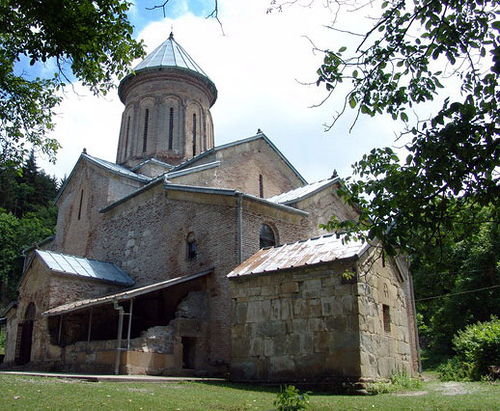 There is substantial evidence to assume that the monastery was active in the period between the 10th and the 19th c. The monastic life revived in 1995.
The history of Kintsvisi Monastery is tightly linked with the most brilliant epoch of the Georgian statehood and culture - the reign of Queen Tamar (1184-1212), one of the most famous and powerful rulers of Georgia, the only woman from the Bagrationi royal family who ruled in her own right and was famous for her wisdom and virtues. She has recently been canonized by the Georgian Church. It was under her reign that Georgia became one of the most powerful states in the Near East. The famous poem "The Night in the Tiger Skin" by Shota Rustaveli is dedicated to her.
The monastery has preserved several churches, namely the Church of the Virgin in the north-west part (10th c.) of which only the sanctuary has survived; a big domed Church of St Nicholas (early 13th c.) and a small hall Church of St. George (14-15th cc.). The circuit walls, entrance gate and the bell-tower erected on it date from the 15th c.

The Church of St Nicholas is built of brick, which makes it different from other Georgian monuments dating from same period, all of which are constructed of hewn stone. Owing to this, the facades have no carvings, which is unusual for Georgian architecture. The whole interior is adorned with wall paintings. The murals, painted in the background dominated by rich and glittering lapis-lazuli (deep blue ultramarine), are best samples of the Georgian medieval art and Eastern Christian culture in general. The theological programme of the paintings is based on Christian dogmas of the Incarnation, Resurrection and Redemption. Along with the traditional Christological cycle, the monument has preserved an elaborate cycle of the Life of St. Nicholas, the image of St. Nino, Illuminator of Georgia (4th c.), and four figures of Saint Syrian Fathers, founders of the monasticism in Georgia (6th c.).

The portraits of the kings from the Bagrationi royal family, those of Queen Tamar, her father King Giorgi III and her son Giorgi Lasha, depicted on the north wall, are most noteworthy among the wall paintings preserved in the church. The figure of the angel, announcing Resurrection of Christ, is a masterpiece of the medieval Georgian Art.
The south wall is adorned with a portrait of the donor, chancellor of Queen Tamar and the Archbishop of Tshkondidi Anton Glonistavisdze, offering a model of the church to St. Nicholas. The inscriptions are made in old Georgian Asomtavruli script.

In the period between the 16th and the 17th cc., the walls of the west narthex were adorned with murals featuring a large composition of "The Last Judgment" and the figures of saints. The north wall next to the door has a portrait of prince Zaza Panaskerteli-Tsitsishvili, famous for medical treatise.
The sanctuary of the Church of the Virgin has preserved murals dating from the middle 13th c., distinguished for high artistic value and unique iconographic programme.