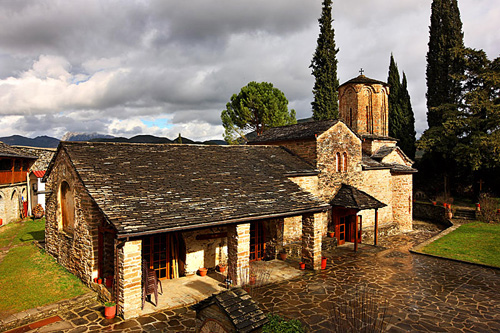 Molyvdoskepasti (means "Led-covered") Monastery one of the oldest and most important monasteries in Greece. It lies about 20km to the northwest of Konitsa, about 300 metres from the Greek-Albanian borders.
Molyvdoskepasti  Monastery is the oldest monastery in Epirus, founded in 670 a.d by Emperor Konstantinos 4th , Pogonatos, it was for centuries a very important cultural and religious center. The monastery has been renovated following the local, stone architecture but according to tradition, it used to be covered with lead (molivdos in Greek) and thus, the name Molivdospepasti! This is something the friendly monks will definitely mention; they will be delighted to guide you around the monastery revealing facts and history.  The narrow asphalted road beyond the monastery, leading to Molivdospepasto and Pogonisko, departs from the river and cutting through the valley, it then splits; to the left towards Pagonisko (3km), to the right towards Molivdoskepasto (1,5km).