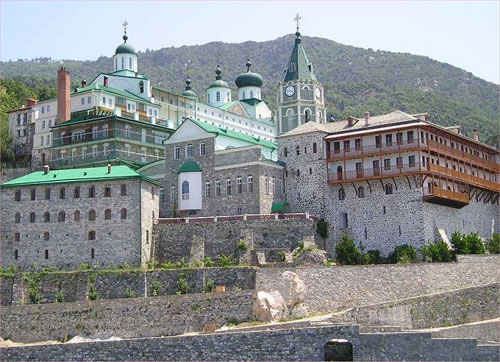 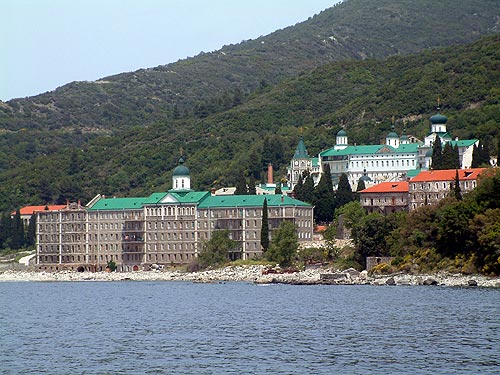 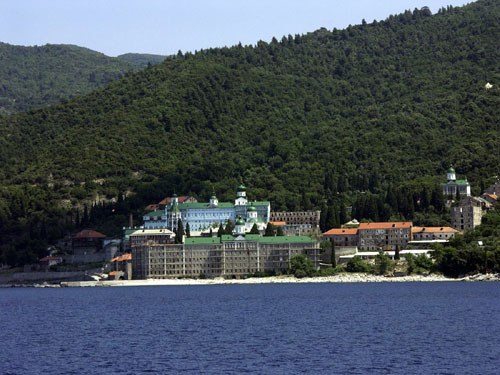 St. Panteleimon Monastery (Greek: Άγιος Παντελεήμων, Aghios Panteleimon;Russian: Пантелеймонов, known as Ρωσσικόν, Rossikon), is a Russian Orthodox monastery built on the south-west side of the peninsula of Mt. Athos in Greece. It is the largest of the many monasteries on the peninsula.
The monastery was founded by several monks from Kiev Rus in the 11th century, which is why it is known as 'Rossikon', and traditionally it was inhabited by Kiev and later by Russian Orthodox monks. It was recognized as a separate monastery in 1169.
The monastery prospered in the 16th and 17th centuries being lavishly sponsored by the Tsars of Moscovy, but it declined dramatically in the 18th century to the point that there were only two Russian and two Bulgarian monks left by 1730.
The construction of the present monastery on a new site, closer to the seashore, was carried out during the first two decades of the nineteenth century, with the financial help of the ruler of Moldo-Wallachia, Skarlatos Kallimachos. Russian monks numbered 1,000 in 1895, 1,446 in 1903, and more than 2,000 by 1913. During the Tatar yoke in Russia, most of the monks were Greeks and Serbs. Today, due to a great decrease in monastic vocations, only 35 monks live in the monastery, which occupies the nineteenth rank in the hierarchical order of the twenty Athonite monasteries. It is coenobitic (i.e., it is a communal monastic life). It also contains four sketes.
The Monastery of St Panteleimon was repeatedly gutted by fires, most famously in 1307 (when Catalan mercenaries set it aflame) and in 1968. The first Russian leader to visit the monastery was President Vladimir Putin (on September 9, 2005).