Monasteries and Churches in Poland 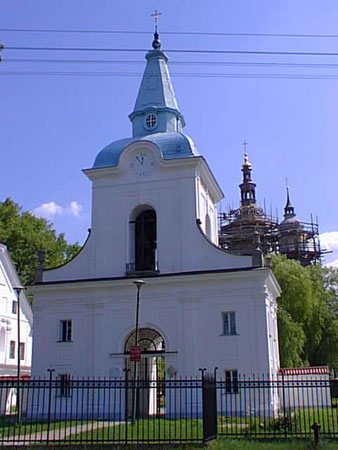 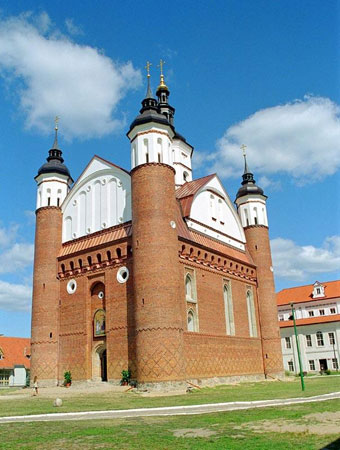 The Monastery in Suprasl was established in 1500. The founders of the monastery were voivode of Nowogrodek Aleksander Chodkiewicz, the owner of Grodek and Zabludow as well as archbishop of Smolensk Jozef Soltan (later the metropolitan of Kijev). The Monastery in Suprasl soon became the second important monastic centre following Kijev-Pieczersk Lavra. Monks from Suprasl had an enormous influence on the development of religious and national consience of the population of Bialystok's region. 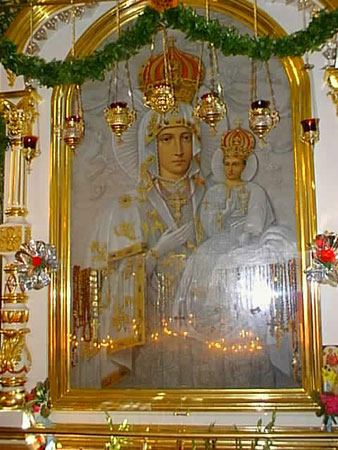 The original placement of the monastery took place in 1498, near the castle on the territory of Grodek. However, this place was not suitable for secluded life. For this reason some of the monks went back to Kijev, and the others moved in 1500 to the place named Suchy Hrod giving the beginning to Suprasl Lavra. In 1501 a wooden church under the invocation of St. John the Theologian, the patron of the Aleksander Chodkiewicz's father - Iwan, who had died in the Turkish captivity. Two years later the construction of a brick church under the invocation of the Annunciation of the Holy Virgin Mary was started. Those investments could only be put into practice owing to the help of the benefactors: Aleksander Chodkiewicz and bishop Jozef Soltan as well as many other representatives of the Orthodox Church. The foundation of monastic churches was confirmed with a tomos of the Ecumenical Patriarch of Constantinople Joachim. Archbishop Jozef Soltan (later Kijev's Metropolitan) gave the copy of the Miraculous Icon of the Mother of God, which he had brought from Smolensk, to the monastery as a present. It later became famous as the Suprasl Icon of the Mother of God. 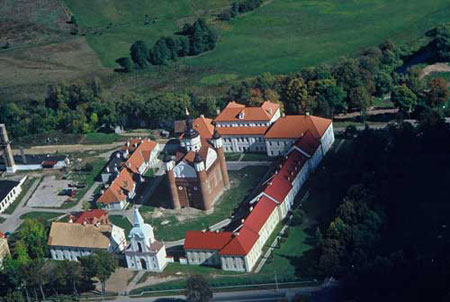 In XVI century Suprasl Monastery maintained close contacts with the major centres of religious life of the Orthodox Church in the country and abroad. The sign of growing importance of the monastery was its raising to the dignity of "Lavra" and bestowing a mitre to archimandryte Tymoteus in 1582 by the Patriarch of Serbia and Bulgaria - Gabriel. The Monastery in Suprasl become a territory of interaction of various religious currents and cultures of many Slavic nations. The architecture and painting of sacral buildings as well as the collections of monastic library are the example of this interaction. The originality of the architecture of the defensive temple consisted in the combination of Gothic and Byzantine styles in church's construction. The accomplishment of this project led to rarely encountered extension of the church vault, building four miniature side towers and a substantial number of rifle ranges in the main cornice. The construction of the building resembles the defensive churches of St. Sophia in Polock, in Synkowicze and Malomozejkow. During the reign of archimandryte Sergiusz Kimbar a group of painters under the direction of „Serbian Nectarios the painter” decorated the interior of the temple with frescos. The style of the frescos resembles the monuments of Serbian monumental paitning, and especially the decor of the monastery in Manasia from 1418. The monastic library possessed about 200 manuscripts and printed books in 1557, and in 1645 their number increased to almost 600. The monastery maintained close contacts with the capital of the Metropolity. The father of congregation's founder - Iwan Chodkiewicz was a Kijev voivode. The second funder Jozef Soltan became the Kijev Metropolitan in 1504. The chapels of the church under the invocation of tha Annunciation of the Holy Virgin Mary were devoted to the Kijev saints: Teodozius of Pieczersk, Borys and Gleb.
The Monastery of Suprasl was the place where many outstanding writers, religious and political activists stayed. Ecumenical Patriarch of Carogrod (Constantinople) Jeremiash, who was on his way back to Moscow, came to Lavra of Suprasl in 1589. He reformed the monastic congregation and made it the main fulcrum (centre) of the Orthodox Church in the west of Lithuania. The monastery gained then the name of the cultural centre with Slavic-wide meaning. Lavra of Suprasl became the centre of theological thought of the Orthodox Church and the cradle of many polemical works. The monks who were defending the dogma of "Greek faith" were open to new trends of philosophical thought which was reflected in sacral art, editorial and polemic activity. These factors contributed to the fact that the Suprasl centre became one of the main orthodox monastic centres in Polish Kingdom in XVI century.
During the council of Brzesc in 1596, archimandryte of the Monastery Hilarion Masalski was among the major opponents of the union. For this reason, uniats bishops wanted to subordinate the monastery to their jurisdiction. Despite the monks resistance the monastery was taken over by the Uniats in 1609. Uniats metropolitans changed the character of the monastery assigning it a residential function. In XVII and XVIII century the new buildings for monks as well as abbot's palace were built. The largest investments were made while Uniats metropolitan Leon Kiszka was residing in the monastery. At the point the Monastery of Suprasl was the place of numerous basilians congregations. Since 1692 a printing house has been opened in the monastic building site which was printing books in Russian, Polish and Latin. 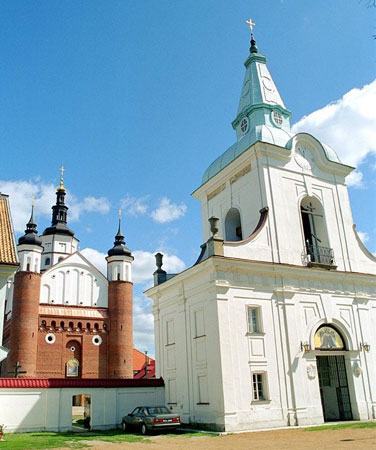 The monastery was returned to orthodoxy in 1824. Since that year a renewed period of its magnificence has started which lasted till the outbreak of First World War. Suprasl again became the main centre of religious and intellectual life in Bialystok's region. In 1888 archimandryte Nicolaj Dalmatow build a new church of St. John the Theologian. The frescos from XVI century which had been concealed by the Uniats ware uncovered. The scientific world had a chance to learn about the richness of the monastic library. The cult of the miraculous Suprasl Icon of the Mother of God was revived. During the First World War the majority of the monks went to Russia (it was then when the Suprasl Icon of the Mother of God was taken to Russia where it was lost - nowadays in the monastery there is a copy made for the 400 anniversary of the Suprasl Lavra). In Second Republic of Poland the Suprasl monastery was taken waway from the Orthodox Church by Roman Catholic Church, which was sanctioned by Polish sanation's authorities. In the interwar period the monastery was being used by salezians. The following loss of the Suprasl monastery was the destruction of the church of the Annunciation of the Holy Virgin Mary by German soldiers in 1944. The rebirth of religious life in Suprasl took place after Second World War. The orthodox parish regained then the church of St. John the Theologian, and in 1984 the monastic parish was reactivated. At the same time, the orthodox community started reconstruction of the destroyed principal church. Since 1996 the Suprasl monastery got back the other building and began their thorough redecoration (as well as the reconstruction of the church of the Annunciation of the Holy Virgin Mary). Nowadays, Archimandryte Gabriel (Giba) is the prior of the monastery.
Parish feasts:
- the feast of the Icon of the Suprasl Mother of God - August 10 (July 28, old style)
- the Annunciation of the Holy Lady Virgin Mary - April 7 (March 25, old style)
- the feast of St. John the Theologian - May 21 (May 8, old style)
In 1998, His Holiness Ecumenical Patriarch BARTHOLOMEW I paid a visit in the Suprasl monastery (15.10.1998). The distinguished guest was interested in the progress of works over the reconstruction of the monastery. The visit of the Patriarch of Constantinople took place again in the important moment in the history of the Suprasl Lavra, when monastery strted regaining its previous magnificence. 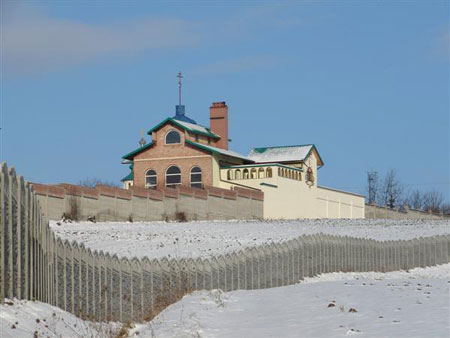 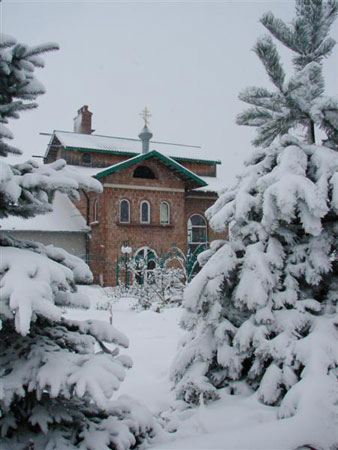 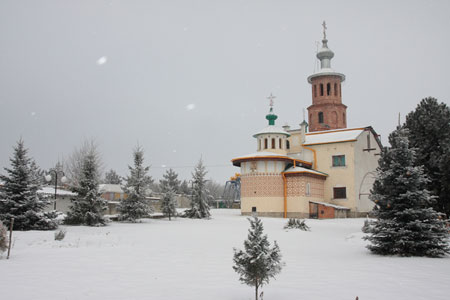 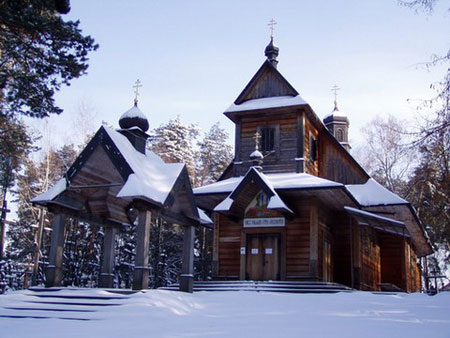 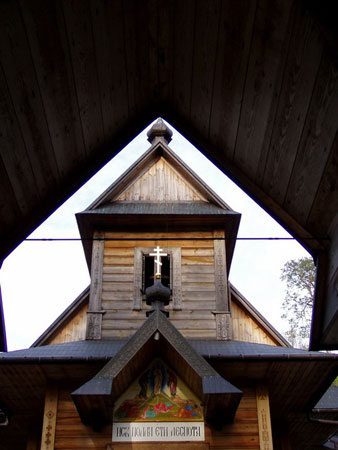 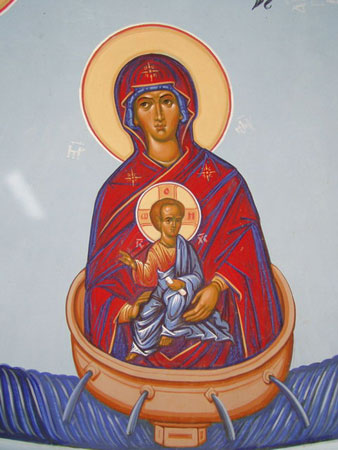 History records that, while Orthodox monastics had inhabited the vicinity of Grabarka since the 13th century, it was not until 1947 that the present women's monastery was established. The present sisterhood consists of many young nuns who have devoted themselves to the work of expanding the monastery, ministering to the needy, and offering hospitality to the tens of thousands of pilgrims who find solace and spiritual comfort on the holy mount. In many ways, the Saints Martha and Mary Monastery is to the Church in Poland what our own Saint Tikhon of Zadonsk Monastery is to our Orthodox Church in America. Passing through the Grabarka monastery's gates, I immediately felt the same blessings that all of us have felt so many times when passing through the arch of our own beloved monastery