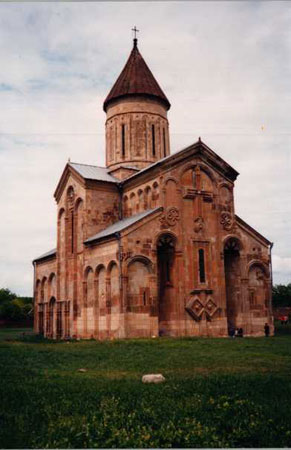 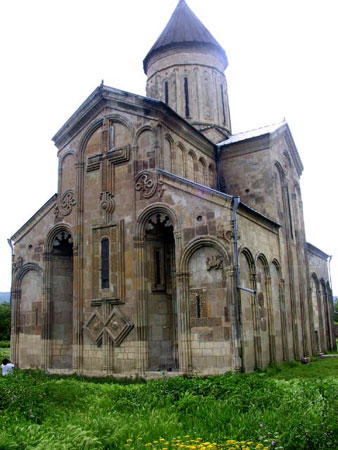 Samtavisi (Georgian: სამთავისი) is an eleventh-century Georgian Orthodox cathedral in eastern Georgia, in the region of Shida Kartli, some 45km from the nation’s capital Tbilisi. The cathedral is now one of the centers of the Eparchy of Samtavisi and Gori of the Georgian Orthodox Church.
The cathedral is located on the left bank of the Lekhura River, some 11km of the town of Kaspi. According to a Georgian tradition, the first monastery on this place was founded by the Assyrian missionary Isidore in 572 and later rebuilt in the 10th century. Neither of these buildings has survived however. The earliest extant structures date to the eleventh century, the main edifice being built in 1030 as revealed by a now lost stone inscription. The cathedral was built by a local bishop and a skilful architect Hilarion who also authored the nearby church of Ashuriani. Heavily damaged by a series of earthquakes, the Cathedral was partially reconstructed in the 15th and 19th centuries. The masterly decorated eastern façade is the only survived original structure.
The Samtavisi Cathedral is a rectangular 4-piered cruciform domed church. It illustrates a Georgian interpretation of the cross-in-square form which set an example for many churches built in the heyday of medieval Georgia. The exterior is distinguished by the liberal use of ornamental blind arcading. The apses do not project, but their internal position is marked by deep recesses in the wall. In contrast to earlier Georgian churches, the drum of the dome is taller surmounted by a conical roof. Artistically, the most rounded portion of the church is its five-arched eastern façade, dominated by the two niches and enlivened by a bold ornate cross motif.
Beyond the main church, the Samtavisi complex includes a badly damaged two-storied bishop’s residence, a small church (5.8х3.2m), and a three-storied belltower (5.7х7.3m) attached to the 3-5m high fence made of stone and brick. All these structures date to the 17th-18th centuries.