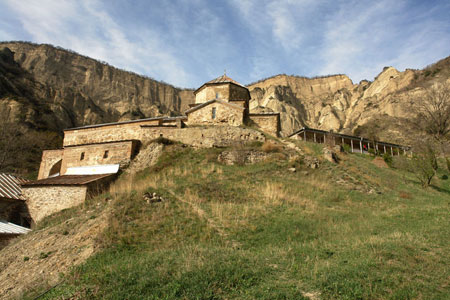 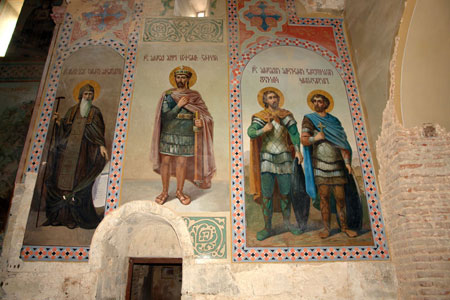 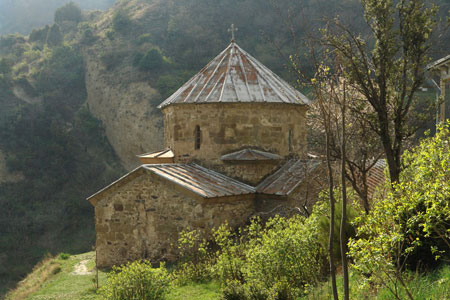 Shio-Mgvime monastery complex was founded in the 6th century by St. Shio, (one of the Thirteen Syrian Fathers). After having a dream, he chose to live in a dark isolated cave near a 6th century church north-west of the ancient city of Mtskheta. His grave is still visible there today. In 11th century, a church was built over Shio's tomb. Another church, dedicated to the Virgin Mary, was erected by King David the builder. The refectory was built in 12t century. 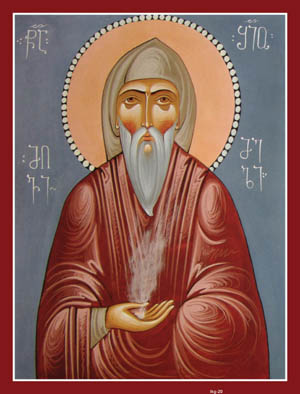 An Antiochian by birth, St. Shio of Mgvime was among the Thirteen Syrian Fathers who preached the Christian Faith in Georgia. His parents were pious nobles who provided their son with a sound education.
When the twenty-year-old Shio heard about the great ascetic labors of St. Ioane of Zedazeni and his disciples who labored in the wilderness, he went in secret to visit them. St. Ioane promised to receive Shio as a disciple, provided his parents agreed to his decision. But when Shio returned home he said nothing to his parents about what had transpired.
Time passed and Shio's parents both entered the monastic life. Then Shio sold all his possessions, distributed the profits to the poor, widows, orphans, and hermits, freed all his family's slaves, and returned to Fr. Ioane.
St. Ioane received Shio joyfully, tonsured him a monk, and blessed him to remain in the wilderness. He labored there with St. Ioane for twenty years. Then Ioane was told in a divine revelation to choose twelve disciples and travel to Georgia to increase the faith of its people. Shio was one of the disciples chosen to follow him on this holy mission.
The holy fathers arrived in Georgia and settled on Zedazeni Mountain. Then, with the blessings of Catholicos Evlavios and Fr. Ioane, they dispersed throughout the country to preach the Word of God.
At his instructor's command, St. Shio settled in the Sarkineti caves near Mtskheta and began to lead a strict ascetic life. There was no water there and many wild animals made their home in the caves, but the privations and tribulations he encountered did not shake St. Shio's great faith. Like the Prophet Elijah, Shio received his food from the mouths of birds that carried it to him.
Once, after St. Shio had prayed at length, a radiant light appeared suddenly in the place where he was, and theMost Holy Theotokos and St. John the Baptist stood before him. After this miraculous visitation St. Shio began to pray with even greater zeal, and he would spend hours alone in the wilderness.
Another time, St. Evagre (at that time ruler of Tsikhedidi and military adviser to King Parsman) went hunting in the Sarkineti Mountains. There he encountered St. Shio and, astonished by his piety, resolved to remain there with him. The news of the ruler's conversion soon spread through all of Georgia, and many people flocked to witness the venerable father's miraculous deeds. Many remained there with them, following St. Evagre's example.
Once St. Shio prayed to God to reveal to him the place where He desired a church to be built. He placed a lump of hot coal in his hand and sprinkled incense on it, as though his hand were a censer. Then he followed the smoke as it swirled up from the hot coal. In the place where it rose straight up like a pillar, he took his staff and marked the ground where the church would be built.
When King Parsman heard about his military adviser's radical change of life, he was deeply disturbed and wandered into the wilderness to find him. But when he witnessed the divine grace shining on St. Shio's face, he took off his crown and knelt humbly before him. Fr. Shio reverently blessed the king, helped him to stand up, and replaced the crown on his head. Following the king's example, all the royal court came to receive Shio's blessing. A certain nobleman with an injured eye knelt before St. Shio, touched his eye to the holy father's foot, and received healing at once.
At another time King Parsman asked St. Shio if there was anything he needed, and he answered, “O Sovereign King, God enlightens the hearts of kings. Do that which your heart tells you!”
In response, the king donated much wealth for the construction of a church in the wilderness: the lands of four villages, a holy chalice and diskos, a gold cross, and an ornately decorated Gospel that had belonged to the holy king Vakhtang Gorgasali (†502).
When construction of the church was complete, the king traveled there in the company of the catholicos, several bishops and St. Ioane of Zedazeni. The hierarchs consecrated the newly built church, and a monastic community soon grew up on its grounds. Eventually, the number of monks laboring at King Parsman's monastery grew to nearly two thousand. Many people visited this place to receive St. Shio's wonder-working blessings, and they were healed from many diseases.
St. Shio performed many miracles: Once a wolf that had been prowling the monastery grounds ravaged a herd of donkeys. When St. Shio heard this, he prayed to God to transform the wolf into the protector of the herd. From that time on the wolf grazed peacefully among the other animals.
With the blessings of both his teacher, Ioane of Zedazeni, and the catholicos of Georgia, St. Shio gathered his disciples, advised them on the path they should follow, appointed Evagre his successor as abbot, and went into reclusion in a well that he had dug for himself. There St. Shio spent fifteen years in prayer and fasting. Finally, when God revealed to him that his death was approaching, St. Shio partook of the Holy Gifts and lifted up his hands, saying, “O Lord, receive the soul of Thy servant!”
Later, during one of the Persian invasions, the soldiers of Shah Abbas uncovered the holy father's relics and carried them back to Persia. In the same year Persia was ravaged by a terrible plague, and the frightened invaders returned the holy relics to the Shio-Mgvime Monastery.
O Holy Father Shio, image of repentance and offering for the Georgian people, entreat God to grant us peace and great mercy!