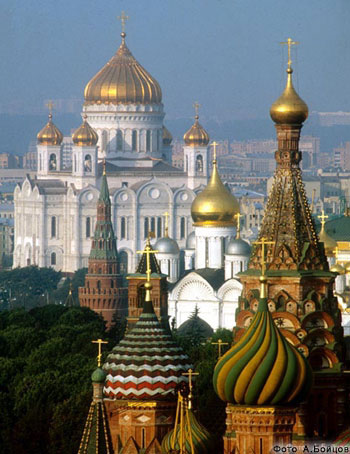 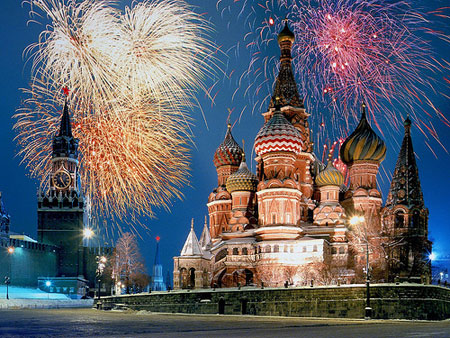 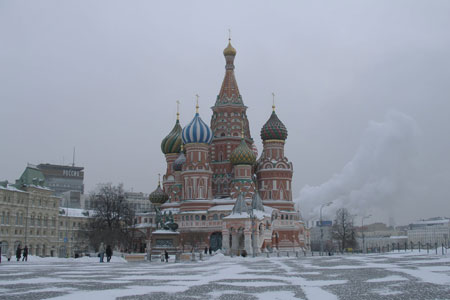 The Cathedral of Intercession of the Virgin on the Moat (Russian: Собор Покрова что на Рву - The Cathedral of the Protection of the Mother of God, or simply Pokrovskiy Cathedral - Russian: Покровский Собор; better known as the Cathedral of Saint Basil the Blessed , Saint Basil's Cathedral - Russian: Храм Василия Блаженного) is a multi-tented church on the Red Square in Moscow that also features distinctive onion domes. It is very often mistaken by Westerners for the Kremlin, whose buildings are in fact situated across the square from the cathedral. Arguably the most recognized building in Russia, it is an international symbol for the nation and for the city of Moscow.
The cathedral was commissioned by Ivan IV (also known as Ivan the Terrible) in Moscow to commemorate the capture of the Khanate of Kazan, and built from 1555 to 1561. In 1588 Tsar Fedor Ivanovich had a chapel added on the eastern side above the grave of Basil Fool for Christ (yurodivy Vassily Blazhenny), a Russian Orthodox saint after whom the cathedral was popularly named.
Saint Basil's is located at the southeast end of Red Square, just across from the Spasskaya Tower of the Kremlin. Not particularly large, it consists of nine chapels built on a single foundation. The cathedral's design follows that of contemporary tented churches, notably those of Ascension in Kolomenskoye (1530) and of St John the Baptist's Decapitation in Dyakovo (1547).
The interior of the cathedral is a collection of separate chapels, each filled with beautiful icons, medieval painted walls, and varying artwork on the top inside of the domes. The feeling is intimate and varied, in contrast to Western cathedrals which usually consist of a massive nave with one artistic style.
In a garden at the front of the cathedral stands a bronze statue commemorating Dmitry Pozharsky and Kuzma Minin, who rallied Russia's volunteer army against the Polish invaders during the Time of Troubles in the late sixteenth and early seventeenth centuries.
The initial concept was to build a cluster of chapels, one dedicated to each of the saints on whose feast day the tsar had won a battle, but the construction of a single central tower unifies these spaces into a single cathedral. A popular historical legend says that Ivan had the architect, Postnik Yakovlev, blinded to prevent him from building a more magnificent building for anyone else. In fact, Postnik Yakovlev built a number of churches after Saint Basil's, including one in Kazan'.