Monastery of the Temptation 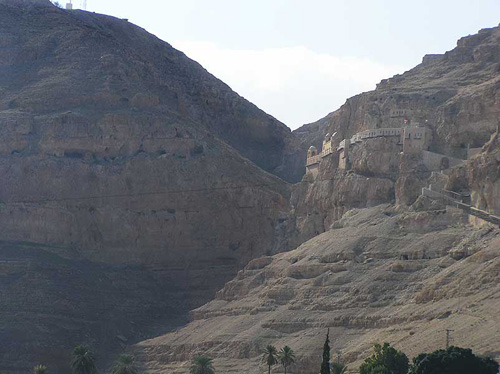 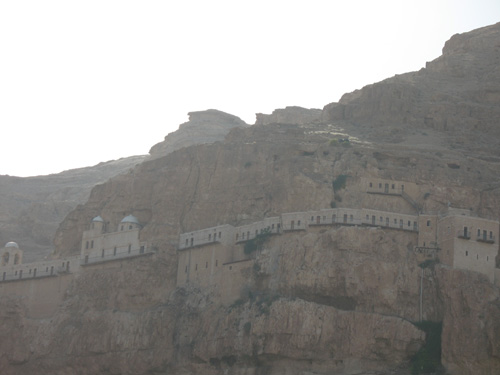 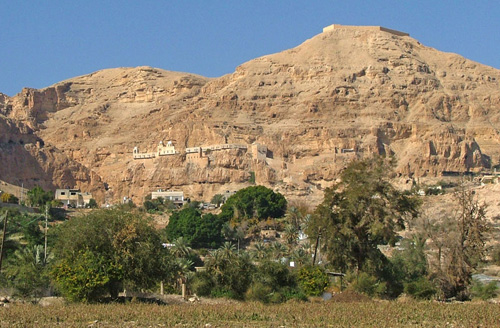 The Monastery of the Temptation (Greek: Μοναστήρι του Πειρασμού, Arabic: دير القرنطل‎ Deir al-Quruntal) is a Greek Orthodox monastery located along a cliff overlooking the Palestinian city of Jericho and the Jordan Valley. It is built upon the summit of the Mount of Temptation, rising 350 meters above sea level.
The earliest monastery was constructed by the Byzantines in the 6th century CE above the cave traditionally said to be that where Jesus spent forty days and forty nights fasting and meditating during the temptation of Satan, about three kilometers northwest of Jericho. The monastery receives its name from the mountain which the early Christians referred to as the "Mount of the Temptation". The Monastery of the Temptation was identified by Augusta Helena of Constantinople as one of the "holy sites" in her pilgrimage in 326 CE
Palestine, including Jericho, was conquered by the Arabs under the Islamic Caliphate of Umar ibn al-Khattab in the 630s and following centuries of Muslim rule, the monastery deteriorated. When the Crusaders invaded the area in 1099, they built two churches on the site: one in a cave half way up the cliff and the second one on the summit.They referred to the site as "Mons Quarantana" (from Quaranta meaning forty, the number of days in the Gospel account of Jesus's fast).
Eventually, after the Muslims reconquered Palestine, the churches disappeared. The land upon which the modern monastery was built was purchased by the Greek Orthodox Church in 1874. In 1895, the monastery was constructed around a crude cave chapel that marks the stone where Jesus sat during his fast.
Three Greek monks currently dwell in the monastery and guide visitors to the site.