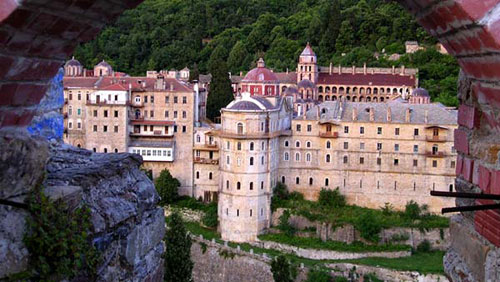 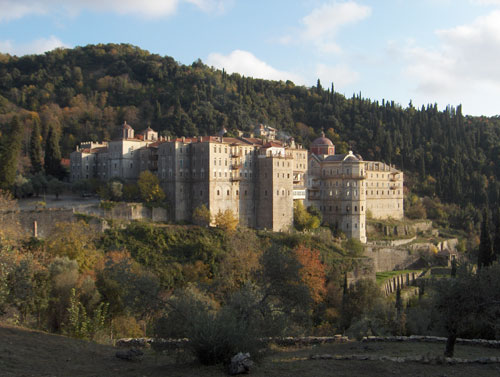 The monastery of Zographou is located at the south-west side of the peninsula. It was built during the tenth century by the monks Moses, Aaron and John from Ohrid. It is dedicated to Saint George. In the Late Byzantine period, the monastery was destroyed by Catalan pirates and rebuilt with the support of the Paleologan dynasty, as well as that of rulers of eastern Europe.
It occupies the ninth rank in the hierarchical order of the twenty Athonite monasteries. It is inhabited by 15 monks (1990) and is coenobitic (communal). Its monks are all Bulgarian, since 1845, and the services are performed in Bulgarian.
Today’s katholikon is a building erected in the 19th century, although it follows the usual Athonite triple-apsed plan. It was frescoed in 1817. The monastery features eight chapels within the precinct, and eight more outside. These chapels are dedicated to Virgin of Akathistos, to the Saints Cyril and Methodius, to the Trasfiguration, to the Saint John the Baptist, to the Saint Demetrios, to the Saints Cosmas and Damian, to the Forty Martyrs and to the Archangels.
North-west of the Katholikon is the Phiale for the blessing of the waters. Just opposite of the Katholikon is the refectory, built into the west wall of the monastery.
The library is located in the monastery’s tower. It features rare manuscripts, Greek and Bulgarian codices, and 10,000 printed books in Greek and the Slavic languages. Its most prized treasure is the codice 1, which contains Bulgaria’s first history, written by the monk Paisios in 1745.